Historic Faces and Places (A historic tour only)

What’s Included: More than enough interesting information. Food is NOT included on this tour.

What To Wear: Dress comfortable. This is a walking tour however, if you or your group requires transportation please let us know in advance.

Taste Harlem Food and Cultural Tours believe that gaining a true understanding of Harlem’s culture can be conveyed through navigating its wide streets and exploring its beautiful and magnificent architecture, much of it dating back to the 19th Century.

In an effort to meet the rising visitor interest in Harlem’s evolving renaissance, we are offering a tour that focuses and history of the people, music and the area’s architectural styles.

The cultural history includes some of the most distinguished theater, religious and residential architecture in the city. In the distinguished building were famous and distinguished people for example Bill Bojangles Robinson, Billy Strayhorn, Alexander Hamilton, Maya Angelou, Kareem Abdul-Jabba and so many more.

Few know for example, that Harlem was once the third largest Jewish community in the world and the tour will explore how that history converges with that of the Harlem’s African America residents. The neighborhood of Harlem of all places, was once home to synagogues and theaters where a Jewish past is revealed.

Your guide for this two hour, will be either a Harlem based resident or area historian.

For those groups who’d like to add dining before or after this tour, Taste Harlem Food and Cultural Tours can arrange breakfast, lunch or dinner options for an additional charge.

“John is a wonderful guide, very knowledgeable and friendly. The tying together of music, literature, and architecture really lends to a lovely tour!!“

“John was very knowledgeable and enthusiastic about Harlem architecture and and its history! We all loved him!“

“John was a great guide. He pointed out things that were of interest to the group. The sign of a good tour is when you leave having learned some new fact or have developed some new appreciation. My group of 4 all left this tour with both new knowledge and new appreciation. Thank you!“

“A great tour! John Reddick was extremely knowledgeable about the area and brought the history to life. I knew very little about Harlem and finished the tour wanting to learn even more. I would strongly recommend this little adventure to everyone– seeing Hamilton house was a real treat.“ 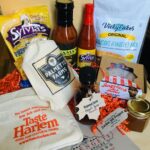 Due to Covid-19, our walking tours won’t be offered until some time in the future. But if we get creative we can support each other and get through these times in style.

The Holiday Gift Boxes have sold out! Thanks so much for your support this season. Stay safe and I wish you all the best in the New Year.

And you can schedule a private tour on Zoom. Stay warm and cozy in your pajamas AND see all the sites.